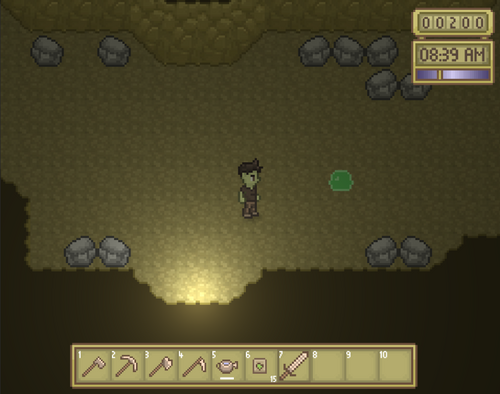 Version 1.02 has been uploaded!

Changelog
* Scene warper can now also be used to warp within the same scene.

* Scene warper Component now automatically configures required parameters upon adding.
* You can now create a Scene Warper by going to GameObject/2D Object/Utility/Scene Warper
* There is now a button to create a scene warp location for a current scene warper
* Fixed an issue that allowed warp locations Z position to be set to something else than 0
* Optimized the OnGizmos call within the warplocation

* Added a window for moving objects to and from containers
* Added a new event called Request Game Pauze, this is event can be called in case you want to pauze the game

Inventory:
* The energy bar now hides when moving inventory icon
* It is now possible to move items between inventories. You can find an example crate within the house.
* You can now stack items specifically

Areas:
* Created a cave area with some stones and random baddy spawns

Combat:
* Added a sword weapon as starter item
* Added blob enemies to the dungeon
* Added a health indicator
* When your player health is zero, you will warp to your bed and health will be reset

Actions:
* "Action Display Item Storage Window", this displays a window with your inventory, and a target inventory.
This window allows you to move items from one inventory to the other.

Time System:
* It is now possible to set a time offset, so that a new day does not start at 0 AM, but can instead start at 6 AM

Fixes:
* Fixed bug in ItemAction_DigHole where it was possible to get an error if there was no target tilemap
* Fixed bug regarding to the Saveable Instance Manager, where new instances in different maps would share the saveable identifiers.
* Fixed bug regarding the scriptable pool container, during switching of scenes instances would get nullified, resulting in errors
* ItemAction_WaterCan was able to give an error when being used without a reference to a water tilemap
* Removed scriptable object updater components from the add component menu, as they are not meant to be added manually.
* Crops now react properly to having a wet ground, if they are on a dry ground too long, they will dissapear